The Pandora Papers: Here are the key regulatory compliance lessons

After the much-debated Panama Papers scandal and FinCEN files for their regulatory compliance implications, the Pandora Papers now reveal the unholy partnership between money, power and influence.

Compiled by the the International Consortium of Investigative Journalists (ICIJ), the Pandora Papers brought to light hidden wealth, tax avoidance and money laundering by some of the world’s rich and powerful personas. The unpleasant fact is the regulatory world still has to go a long way to address tax avoidance (which is legal but unethical very often).

The ICIJ says: “In an era of widening authoritarianism and inequality, the Pandora Papers investigation provides an unequaled perspective on how money and power operate in the 21st century – and how the rule of law has been bent and broken around the world by a system of financial secrecy enabled by the U.S. and other wealthy nations,” which indicates the moral questions involved in present-day tax compliance.

In this article, we will go through the details around the Pandora Papers, their key revelations and the regulatory compliance lessons involved in the leak.

What are the Pandora Papers?

The Pandora Papers are the name given to the leaked documents that reveal the immoral or corrupt practices of many wealthy and influential people across the globe. At around 12 million, the size of the data leak is the largest of its kind, topping the earlier Panama Papers and Paradise Papers. The documents originated from 14 offshore financial service providers, according to the ICIJ.

The papers reveal the tax avoidance schemes of many prominent individuals who, in many instances, use relaxed laws in offshore locations. The people named in the papers used a complex web of shell companies, tax havens and offshore accounts to hide their ownership of assets worth several billion dollars.

After becoming known in October 2021, the papers have already exposed politicians from 90 countries for their schemes in avoiding taxes and hiding money offshore. These documents are expected to open a ‘Pandora’s box’ of potential investigations.

Who is named in the data leak?

The people named in the Pandora Papers include prominent world leaders, politicians, corporate executives, celebrities, and billionaires. The papers “uncovered financial secrets of 35 current and former world leaders, more than 330 politicians and public officials in 91 countries and territories, and a global line-up of fugitives, con artists and murderers,” says the ICIJ.

In the following tables, we look at some of the people named in the Pandora Papers and the revelations against them. 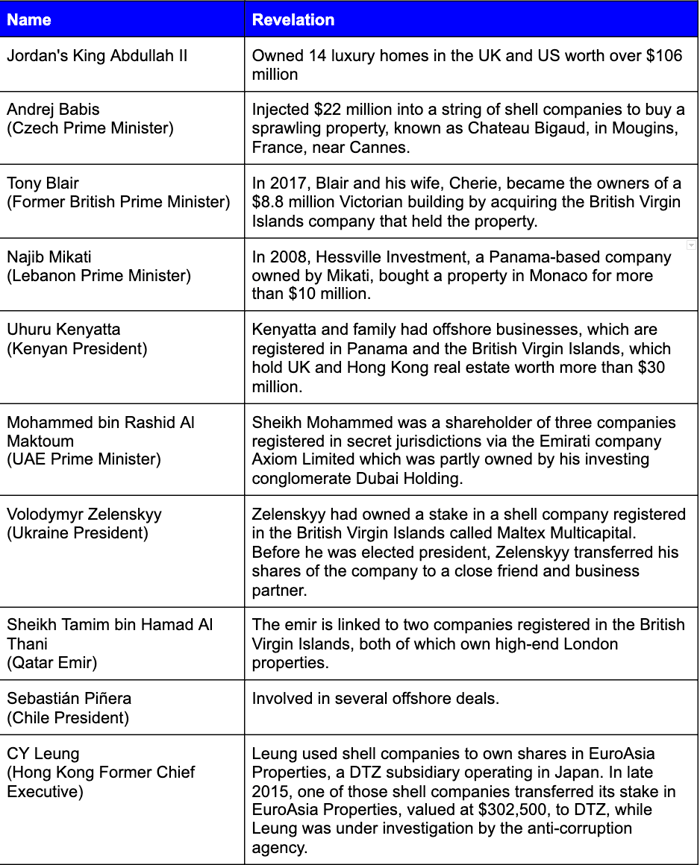 Where are the 336 politicians in the Pandora Papers from? 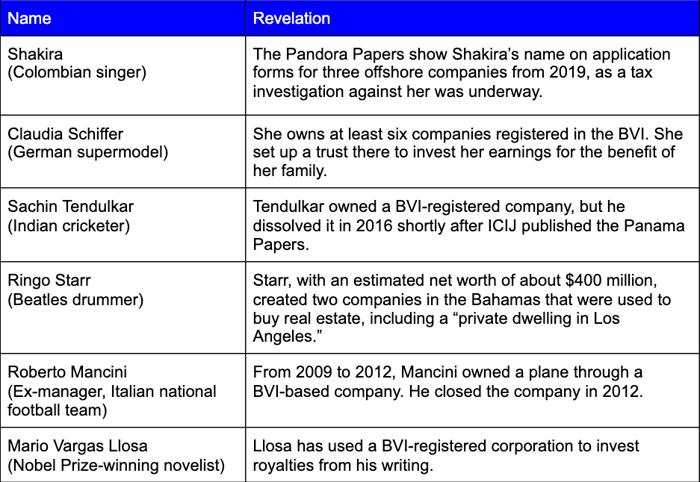 FATF response on the Pandora Papers

Following its recently concluded fifth Plenary, the Financial Action Task Force (FATF) agreed that the leaked documents “have highlighted, once again, that not enough is being done to prevent criminals from hiding illicit wealth and activities behind complex corporate structures and in offshore banks.”

What are the regulatory compliance lessons from the Pandora Papers?

We cannot find any inappropriate or illegal behaviour in most of the leaked documents as offshore accounts and companies are often legal. However, the papers are an eye-opener on ethical grounds. Lenient company and taxation laws in offshore locations are often abused for selfish motives.

Here are some lessons we gathered from the data leak:

The problem of tax havens

There have been enough words and some actions on the international level to eradicate offshore locations that shelter tax dodging and money laundering. However, there is no change in the status quo for those who needed the tax havens the most. “The offshore system is nothing if not adaptable, and cross-border financial crime and tax dodging continue to thrive,” says the ICIJ.

The laws in certain jurisdictions and international agreements might prevent small and medium tax dodgers. Meanwhile, the ultra-rich, white-collar fraudsters, terrorism funders and tax-allergic corporates continue to enjoy the ‘offshore services’. ICIJ notes that when an offshore jurisdiction comes under pressure from authorities, others use its misfortune as a marketing opportunity”.

The countries that are prone to abuse their financial systems by moving undisclosed assets into them would now need to make laws requiring ‘enablers’ such as trust companies, lawyers and art dealers to investigate foreign clients on their motives. The Pandora Papers revealed that little-known trust companies in Sioux Falls, South Dakota, established nearly 30 trusts in recent years connected to people or companies accused of corruption, human rights abuses or other wrongdoing in some of the world’s poorest communities.

Keeping this in mind, a US group of lawmakers has come up with the Enablers Act. If passed, this would amend the 51-year-old Bank Secrecy Act in the country by requiring the Treasury Department to create basic due diligence rules for trust companies, lawyers, investment advisors, accountants, art dealers, public relations firms and other professionals.

For Financial institutions, it’s time for Enhanced Due Diligence

The compliance teams in financial institutions may now need to reassess the money laundering risk of their customers. Adverse Media Screening would help find out the presence of risky customers given that the leaked files are now available to the public.

It would also help identify Politically Exposed Persons (PEPs) for further scrutiny. They might need to reassess the risk mitigation strategy around PEPs. Suspicious cases around trusts, shell companies and risky jurisdictions mentioned in the data leaks should also be scrutinised in accordance with enhanced due diligence procedures.

According to Lauren Kohr, senior director of AML for the Americas at the Association of Certified Anti-Money Laundering Specialists (ACAMS), AML experts “methodically step back and analyse the success of their overall risk-based AFC ([anti-financial crime]) programme.”

She suggested that compliance professionals evaluate the effectiveness of their firms’ customer due diligence (CDD), enhanced due diligence (EDD), and beneficial ownership regimes and make necessary adjustments “to be more effective in detecting the threats posed.”

While it is in the hands of global regulators to bring in changes to their laws and regulations so that financial systems are not abused, compliance teams in financial institutions need to be far-sighted and be ready to face the worst of situations. New generation Regtech solutions powered by machine learning and Big Data analytics can help them build sustainable AML compliance programmes and make their financial crime defence futuristic.

To know more about our AML compliance solutions and request a demo, speak to one of our experts.

Tookitaki has won the 2020 Digital Innovation Award from the World Information Technology and Services Alliance (WITSA) as part of the industry body's Global ICT Excellence Awards. Nominated by...
Read More

One of the fastest growing economies in Southeast Asia, the Philippines, known to be a traditionally cash-heavy nation, has made significant strides in the digital transformation of its payment...
Read More