Global financial crime watchdog, the Financial Action Task Force (FATF), concluded its latest plenary session in October, with participants from more than 200 jurisdictions. It was the first such meeting under the newly appointed head T Raja Kumar of Singapore.

The plenary discussed a wide range of topics and issues, including the ongoing trouble between Russian and Ukraine, change in the list of jurisdictions under increased monitoring or the so-called grey list, additional anti-money laundering/countering the financing of terrorism and countering proliferation financing (AML/CFT/CPF) and emerging financial crime trends and predicate offences.

Here are the key outcomes of the session:

The plenary agreed to release draft guidance on the revised Recommendation 24 for public consultation to help countries and the private sector implement FATF's strengthened requirements on beneficial ownership. The recommendation looks to prevent criminals from hiding illicit activity behind opaque corporate structures. It also approved the release of a public consultation document on proposed revisions to Recommendation 25 on transparency and beneficial ownership of legal arrangements.

The revised Recommendation 24 explicitly requires countries to use a combination of mechanisms for collecting beneficial ownership information to ensure that adequate, accurate and up-to-date information on the beneficial ownership of legal persons is available and accessible by competent authorities. Such data can also help financial institutions implement customer due diligence (CDD) requirements on corporate vehicles, including identifying the beneficial owner, identifying and managing financial crime risks, and implementing AML/CFT controls and measures based on those risks.

The FATF removed Nicaragua and Pakistan from its list of "jurisdictions under increased monitoring" or the so-called grey list. It noted that Nicaragua addressed technical deficiencies to meet the commitments of its action plan regarding its strategic deficiencies. At the same time, Pakistan strengthened the effectiveness of its AML/CFT regime and addressed technical shortcomings to meet the obligations of its action plans. The watchdog added the Democratic Republic of Congo (DRC), Mozambique and Tanzania to the grey list.

Myanmar has been added to the list of "jurisdictions subject to a call for action" or the black list (countries or jurisdictions with serious strategic deficiencies to counter money laundering, terrorist financing, and financing of proliferation). The international agency pointed out that most of the country's action items still need to be addressed after a year beyond the action plan deadline. The FATF called on its members and other jurisdictions to apply enhanced due diligence measures proportionate to the risk arising from Myanmar.

The FATF noted that the size of confiscated criminal proceeds is estimated to be less than 1% of total criminal proceeds. There needs to be ambitious and decisive action to drive more significant asset recovery. The plenary agreed on the importance of a more robust legal framework, rapid and smooth international cooperation and strengthened FATF standards for greater global asset recovery results.

The FATF raised concerns about the fewer investigations and prosecutions of laundering proceeds from synthetic opioid trafficking. This is despite most countries identifying drug trafficking as a major predicate offence for money laundering and the growing number of incidents leading to loss of life. The watchdog noted that it worked on assisting law enforcement and other authorities in carrying out financial investigations into the growing illicit trade in fentanyl and other synthetic opioids, especially in North America, parts of Africa and Asia, more effectively.

The FATF will publish a report before the end of 2022 including risk indicators that can help identify suspicious activity and provide recommendations on the best approaches to detect and disrupt financial flows relating to the illegal drug trade. It will also propose public-private partnerships to share red-flag information and help the private sector better identify and report suspicious activity.

The FATF reiterated that the ongoing Russian invasion of Ukraine is against its core principles, aiming to promote security, safety and the financial system's integrity. It decided to impose additional restrictions, including barring the country from participating in current and future FATF project teams and meetings of the FATF-Style Regional Bodies as a FATF Member. The FATF had stripped Russia of all its leadership roles and restrictions.

The watchdog also cautioned all jurisdictions to be vigilant to emerging risks from the circumvention of measures taken against Russia to protect the international financial system.

The FATF noted that it is working on various projects on countering the laundering of proceeds from ransomware attacks and updating the FATF best practices paper on combating the abuse of non-profit organisations. There are also ongoing activities to implement the March 2022 Strategic Vision for the Global Network of 206 jurisdictions that have jointly agreed to strengthen their regimes to tackle money laundering, terrorist and proliferation financing. During the plenary, the members approved a report on the illicit proceeds generated from the supply chains for fentanyl and related synthetic opioids. They discussed a report on money laundering through arts, antiquities and other cultural objects, which will be finalised by February 2023.

Headquartered in Singapore, Tookitaki is a regulatory technology company offering financial crime detection and prevention to some of the world's leading banks and fintech companies to help them stay vigilant and compliant with the latest standards set by regional regulators and international watchdogs such as the FATF.

For our customers, like traditional banks and fintech companies, an extensive understanding of their consumers is necessary for effective and comprehensive risk policies. The AMLS is a product that enables this through its Intelligent Alert Detection (IAD) for Detection and Prevention and its Smart Alert Management (SAM) for the efficient management of AML alerts.

Request a demo to understand how our cutting-edge solution can help you build agile and scalable compliance programmes. 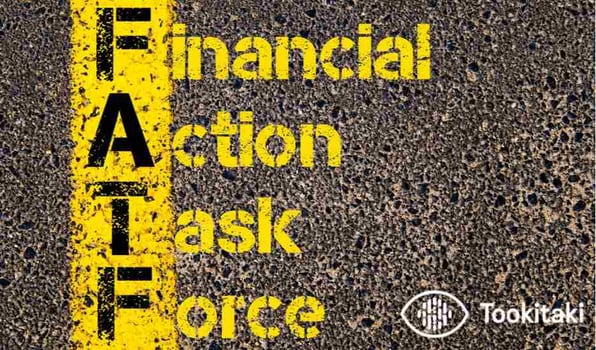 The Financial Action Task Force (FATF), the intergovernmental body formed in 1989 to combating money laundering, is celebrating its 30th anniversary this year. Since its inception, the global agency...
Read More

The Financial Action Task Force (FATF) says institutions should be sharing information between them to detect money laundering more easily and comply with the Anti-Money Laundering (AML) and...
Read More

The FATF Pushes For Information-Sharing Rules In Crypto

According to a worldwide anti-money laundering watchdog, the majority of nations lack "travel rule" laws that may aid in preventing the unauthorised use of cryptocurrencies by criminals and...
Read More